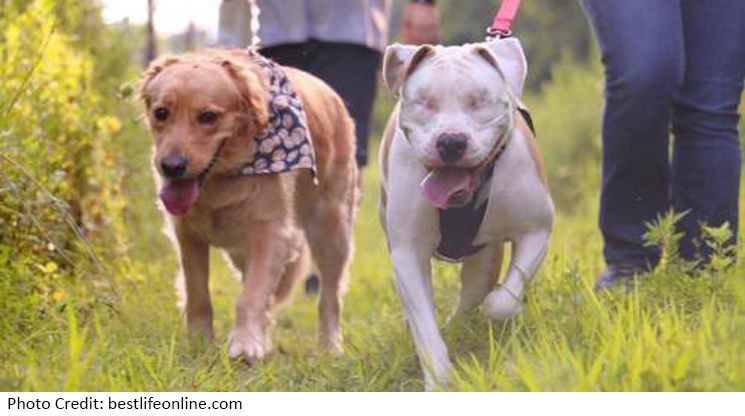 Still just a puppy, a Pitbull named Bear was walking around a gas station in Trenton, NJ when he was hit by a car. Quickly racing away from the scene, the driver left him there to die. Luckily, someone nearby had witnessed the horrific accident and rushed Bear to an animal hospital, where he was treated for his extensive injuries. Soon after, his owner arrived and identified him, only to leave and never return. Bear was left completely blind, but worst of all, with no one and nowhere to call home.

It wasn’t until a woman who worked for the animal hospital called her daughter, that Bear’s luck would change. After hearing about the severity of Bear’s situation, Katie chose to open her heart and home to the poor soul.

It’s thanks to Katie, that Bear is now three years old and full of life. However, caring for a dog with special needs can be a challenge. Since his adoption, Katie has worked hard with Bear to overcome his fear of cars and new environments. While at first only walking between his owner’s legs, Bear is now much more confident on the road. Katie believes that “with patience and understanding those obstacles were overcome,” and even now believes that Bear helps her just as much as she helps him.

“Whenever I’m feeling down or more panicked than usual, he will sit on top of me…and do anything in his power to lighten my world. It can be so hard when you have a dog with issues, but I swear it gets so much better and it is always worth it.”

Bear’s story has reached a nationwide platform with people falling in love with him and his joy for life. His ability to persevere while still being an affectionate and happy dog is a perfect example of finding the good despite the bad. Though he may have lost his vision, one thing is absolutely clear: Bear’s story can help us all see the light.

To learn more about Bear, visit here and to help other dogs like him visit your nearby animal shelter/hospital.